This is so unlike this blog. Really, it really isn’t in the vein of the posts that go up here, but when I sit back to think what is that vein, I am drained of blood and left with a numb tongue (which is a common occurrence when blood is drained). A well-meaning friend with whom I was discussing the nature and dynamics of this post, shuddered at the thought of such content pasting itself on this blog (that holy? 😮 ). She recommended that I put it up on another blog. I thought creating a new blog for the sake of one post was not really the way I saw myself spending a good afternoon (not that I have many ideas for the same).

Readers who are still sucking their thumb, or cross their heart every time someone says “*ex” (and hence wouldn’t study dinosaurs) or shut their child’s ears as soon as someone talks about the real person behind the stork should perhaps not read this post. This post is bad. Chee chee!

I was recently returning to Bangalore and groped my way into the upper berth (which is the only place that I fit into without forcing my feet to act like a toll bridge blockade for the narrow aisle of the train). For those who aren’t familiar with Indian railways, feel blessed. Most compartments are configured as sets of 8 berths.

The line marked (S) is a pair of berths along the side of the train (hence, S. Profound, no?). The parallel vertical lines are sets of 3 berths each. I take the upper berth which is the topmost berth along the vertical lines. The space between (S) line and the parallel lines is the aisle and is usually as narrow as shown here. What lies there depends on the compartment. If you are in the sleeper class (no clue why that is called so. Everyone sleeps whether out there or elsewhere!) it is usually dotted – and colourfully so, at least to the Biharis – with peanut shells, a pickle that flew out of the spoon that was being vigorously shaken over someone’s plate, a lot of liquid (usually accompanied with a baby crying at one end of the trail), lots of slippers and more. In the A/C compartments, it is usually less colourful – and hence, not fancied by the true blooded Indian – but has its own share of vibrant strokes. The beauty of traveling by train lies in the personal touch that each passenger lends to the journey.

Such a personal touch (ewww!) was lent to my journey back to Bangalore. As I was saying, I was in the upper berth with one foot of legs and feet hanging out ready to knock any vendor’s basket or a Sardarji’s pagadi. Ever since I saw someone lose their footwear – when taken off before they went to sleep – I go to sleep with my feet well clad!! “Don’t you find this uncomfortable,” a friend had once asked. “Not as much as getting off the train without anything on my feet!” That is my personal touch to your journey.

So here I was enjoying a good night’s sleep while being bounced between plywood lining and the two cold steel bars. The A/C would freeze my derriere before I turned over and … the rest is of no concern to you! I don’t enjoy traveling in the A/C compartment, because the world is sealed out and I recall one incident when the A/C refused to work and the people in the compartment broke the tough tinted plexiglass (?) in order to gain some ventilation. I was once given an extremely drenched pillow to use and I had to stealthily place it near some snoring passenger’s legs. I wonder why people clucked their tongue and shook their head at him the following day!

So here again, I was enjoying my sleep and probably dreaming of a marriage between consonants and vowels and how musical that wedding was! I woke up to some whimpering. I check my watch and it glowed a green 4:00 back at me. That was an odd hour for someone to be up and whimpering. I looked around and couldn’t spot anyone trembling or sobbing visibly. I went back to sleep and I saw a “thimble” dance around a shrub and run over to kiss a “rig” under a sprig of holly and several “thimblerigs” born. It is so unfortunate that vilest children are oft born to the simplest and most hardworking parents. While I was reflecting on this – in my dream – I heard the whimpering again. This time I knew it wasn’t that little …. forget it! Odd things spring up in my dream. So I woke up and rose to religiously splatter my forehead on the roof of the train. I looked around and the “whimpering” seemed to come from the upper berth on the side (please refer to the partially-to-scale diagram above). I recalled the lesson from school Physics (which seemed to be very different from college Physics) where the eyes widen in the dark to allow more light to enter. I was busy wondering whether my eyes were widening out of respect for Physics or for the knowledge that was dawning on me.

The man on the side upper berth was having telephone-*ex. Suck the thumb, cross your heart, shut your kid’s ears because I know you are still reading!! Chee chee to you. 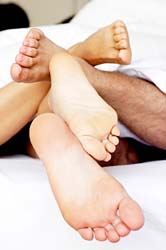 Well, I am not sure of the *ex of the passenger though his/her activity was surely *ex. Let us assume that it was a guy because another friend of mine said “Chee, it can’t be a woman.” I am still trying to understand what creation of God was at the other end of the line! So let’s damn the man, spit on the side and bottoms up (a difficult task in the upper berth. I need to lie down, pour water into my mouth, rise a little and then swallow it in little by little, lest my trembling core muscles get a cramp).

So where were we? Aah! Watching a man under a blanket with unusual tremors around the spatial centre of the berth. It took me a while to realise this thing and I was hoping he (we agreed on a He, right?) would be a little more quiet. More embarrassment was to follow. People around me heard him too and woke up to look straight up at the man (me) on the upper berth. I had to often do the act of checking my watch and letting it glow to let them all know that I wasn’t the one whimpering – for some widely accepted reason, a man who checks his watch and makes it glow at 4:00 is unlikely to whimper under any calamity. I so like it when stereotypes work in my favour!! 🙂

This man wouldn’t stop and unleashed a battery of tell-tale sounds and snorts of all sorts (aah! always the rhymer!) while I kept seriously wondering whether it was a guy or a girl. Then I was wondering whether this was a dream or real. Then I was wondering whether I was going to Bangalore or returning – no, looking at the direction in which a train is heading is no clue. Then I was wondering whether I should pull off the blanket (not mine, dear. Get real!) or not. I was scared. What if he pounced on me and shouted “Aha! Gotcha. Curiosity killed the cat – any size!”? What if… yuck! So here I was busy creating a set of opposite actions and options while letting the moans grow louder. I could hear the voice on the phone too, and it was getting weird after some time as the *ex of the voices was becoming even more difficult to determine. I think he muttered a female name and was asking her not to go away – that could be funny though! Honey! yes, come on… hey! btw, I forgot to pay the electricity bill. Could you kinda hold on – I mean figuratively too – and I’ll just be back.

A few people had woken up and seemed rather relaxed about this morning wakeup alarm which never seemed to shut up – slapping it on its head wasn’t an option! I figured that Bangalore was near or rather hoped it was near.

There was a young lady below me. I mean berth-wise. Sheesh! So this young lady who was lying below me…. no, beneath me… no, in the berth below mine! Yes, so this young lady who was in this berth below mine (and some silly anti-caste-system fanatic would jump at me if he heard this line) stepped out and started casually folding her blanket. Errrm, am I the only one hearing things? Excuse me, aren’t you supposed to cover your face or do something melodramatic? I was disappointed in her. She wasn’t reacting at all.

I decided to step down too. Bad move. I tend to jump off the upper berth. No patience for the rung-a-time-and-lo!-you-have-landed procedures of train travelers. I check to ensure that I don’t land on anyone’s head or foot and then jump down. I suppose that startled her. Gosh! All that noise didn’t and a Homo Sapien’s jump from the upper berth scares her! We stood facing each other. My back was towards the epileptic man in the side upper berth, and she was facing me (or using this as an excuse to sneak-peek the man of the hour). One cannot pretend being epicene in such a setting with the background score rendered thus. I smiled and asked what seemed to be the second most politically correct question (the first being: What is the time?) of that minute: “Will we reach Cantt station?” She must have felt pity for this bumbling Homo Sapien and she answered: “Yes” (I think the man in the background was also mumbling a few Yes’s).

We went to brush our teeth at different locations and I decided to do so at the wash basin on the outside rather than inside the restrooms (why give anyone a chance to let their imagination fly around!?). I walked back to my place and dutifully shook my head at this man who was going on and on for (I had checked my watch) over an hour now. Those who saw me shake my head later smiled at me while we walked on the platform to the exit of the station.

It’s been over a fortnight since this happened and if I said that I still remember the colour of the blanket, it is nothing great. All blankets of the Indian Railway are the same colour and have stayed that way for a few years. What frightens me now is what if I got that guy’s blanket on my next trip!? Eeeewwww!!! Perhaps I should start carrying my own blanket hereafter! And perhaps headphones, too. I also need to replace the battery on my watch!