I was forbidden to enter the room unless summoned. The door that separated us was furbelowed with the trembling brightness of the candle within. There was none but he in there, he and his necessity to capture all of his life. Often I imagined the veneer thin to reveal a frail man holding back death with his monomania to fabricate the finest elegy in praise of himself. There he sat, spine pressed against his soaked shirt, like the subdued dorsal climb of a dragon. His eyes shone like the beast’s too. His hands furtively crossed a blank sheet while his head bobbed in the waves of the choicest memories he wanted spelt out at his funeral. No. Another paper rolling on the floor. Before I could see what he had written, the door became opaque.
“When I die, si? will you read this at my funeral? Like I show you. You might want to stand proud – because you are the chosen one, si? – but not happy that I am dead. I am not, till the elegy is made properly.”
And he smiled in a manner that made my nape tremble to the frozen touch of evil. He would not hear of my leaving and bade – nay, ordered me with unspoken threats of worlds which he seemed to have visited and where he was to soon go. His wife and young daughter, sat mutely in the corner, perhaps wondering whether I was one of his kind, else why was I so obedient?
I kept looking at the door that would let me escape along roads which were familiar, leaving a yawning cavity from where a man-devil could still yoke me in, and then I looked at the flounced door which could burst open any minute or could be locked only to have it thundered apart by a creature whose impish frame and mismatched eyes slackened a man’s guard long enough to lose his soul to the grinning question that often bounced forth: “Si?” My eyes drew many a thread as on a loom between the knobs only to find me hemmed in with lesser resolve to break from the iron grip of the stool I was seated on. His wife shook her head and pulled her daughter’s now sleeping head closer to her bosom.
The door burst open and for reasons unknown, I looked at the wrong door before turning back to the one that was opened.
“You not going anywhere, senor. Haan! Si?”
I wasn’t sure whether his was a question or a statement to break any plans I might have had. But I didn’t. No plans, only hopes. I shook my head for a while covering the span of his eyes. He bowed his head a bit and returned to his room.
I waited, pressing my palms together squeezing the anxiety out of every minute that paused longer to mock at me.
And then he screamed, and threw something fragile against the door. I saw the door stretch towards me on impact.
“Got it! I got it all. This will be the best. The best. The…” 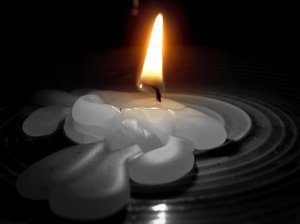 Everything quietened within, following a soft thump on the wooden floor. The candle still flickered loudly. The girl was still asleep but her mother’s face had frozen into a happiness which was forced to wear the scarf of propriety. I bit my lip as I leaned towards the door.
“Mr. Carlos?”
I waited for the “Si?” and on finding none, cleared my throat.
“Everything ok in there, Mr. Carlos?”
I slowly rose and inched my way towards the door, my heart betraying me by thumping loudly and pushing me door-ward.
I held on to the knob but just kept looking at it. The yellow fingered brilliance danced on my shoe’s nose. I stepped back where nothing from within the room could touch me.
Mrs. Carlos. I think your husband wouldn’t have wanted me to open the door until he called for me. I think I must leave now, Mrs. Carlos. I am sure you understand. As he hasn’t told me how to read his elegy, I wouldn’t be able to do so at his funeral. I am sure you understand. Mrs. Carlos?”

I turned around to look at the frail (I never noticed how like her husband she was) lady. There she crouched near a threshold gazing at me with large eyes lifted by a chillingly familiar smile.
“You not going anywhere, senor. Si?”

2 thoughts on “An Elegy’s want”