If you left this blog after reading those two words, you would have a good feel of what Tom Alter portrayed at Y’s private assembly of friends (and I am indebted to her generosity in inviting me). I have always respected his acting, but today he shocked me in more ways than one. 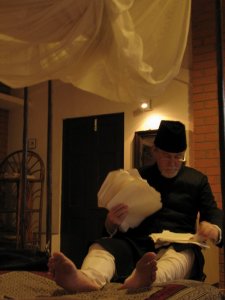 This is a monologue written and directed by M. Sayeed Alam. The Urdu is mature and highly polished. I was stumbling across lines trying to figure out some of the words and in the process had to miss the lines that didn’t wait for me. Such chaste Urdu left many in the audience clueless but the performance was still exemplary.
The gathering was at Y’s private auditorium and the gathering, in Mr. Alter’s words: “to call them the ‘audience’ would almost be an insult“. Sir, call us anything, and it doesn’t matter, but please call us whenever and wherever you perform.
This play is composed as a dictation by Maulana Abul Kalam Azad to his friend and secretary, Humayun Kabir. Humayun is often asked questions and Maulana summarises it for us. The book that Humayun is drafting is “India Wins Freedom”. The agreement is that Maulana will speak in Urdu (sprinkled with Arabic and Farsi) and it is up to Humayun to render it appropriately in English. Maulana often teases Humayun for not having the “Jawahar-waali baat” in his English. The script was so effortlessly well polished that Humayun’s corporeal absence wasn’t felt.
The play’s brilliance rests as much on Mr. Alter’s talent as on Mr. Alam’s script. Some of the slips were not missed but they were overshadowed by the sheer strength and grip of the play. What was well done was the English accent in a typical Indian style by someone whose native tongue is English. But here is where Mr. Alter goes one step further to surprise us all: the script from which he was reading and preparing for the play was all written in Urdu. It turns out that he has learnt Urdu well enough to read and write in the Arabic script!! And I thought I was doing something oddly different by being a pucca South Indian but having my allegiance with Urdu!
Mr. Alter made good use of the props though after a point I wondered whether the grunts and groans were dramatic or genuine (whenever he kept switching on/off the lights). The Chennai heat forced him to unbutton his sherwani a bit (and I don’t think that was in the script)!

The play had Maulana take us through his life starting with a declaration that announcing his date of birth in such a manner resembled announcements prisoners made about themselves. Maulana was no alien to jails and had stayed a good length at the Ahmednagar jailhouse. Maulana takes us through various interesting phases in his life including the domestic scene and his political life. In all of them, the script brings out the sensitive side of Maulana and that was very well done.

The entire play shows us various facets of Maulana’s personality including his sense of humour, the poet in him, his punctured ego, his love for his wife and how he hardly ever got a chance to let her know about that while she was alive and the tongue-in-cheek commentary about various political figures of his times. He does not mince words about his thoughts on Gandhi or Nehru. His comments on Jinnah and Vallabhai Patel are pointed and scathing. The beauty of the script is that it is well balanced though often the attempt at balancing it was visible. Maulana would point out the mistake in, say, Jinnah and then say good things about him in the next sentence and then back to blaming him for his outlook and then stating that it was not entirely Jinnah’s faults. This back and forth was often visible though didn’t tire or become too stark.

The portions where Maulana talks about his begum and how she said “Khuda hafiz” when he left Calcutta were very touching. It was beautiful to get a glimpse into the personal life of such a statesman. The soft words he chose to describe his wife and their relationship were beautiful and moving. I simply loved the lines when he said, “Maut ko kis se rishtedari hai; Aaj woh, to kal humaari hai” (What bonds does death have with anyone, today it is his, and tomorrow it shall be mine). Maulana prayed at an unknown grave till he was released and allowed to visit his wife’s actual grave. I found that immensely sweet and wondered how genuine gestures of love and affection often go unnoticed or delayed. Maulana recalls offering prayers at Jinnah’s grave too (much after the partition). He says here (and I paraphrase): “Jo chale jaatey hai unse maafi maang leni chahiye; aur unko maaf bhi kar dena chahiye”

This play helped me better understand Maulana’s views and I respected the man for that. It also revealed him in the plain light of a human being when he cribs about being just an Education minister while Nehru, with a difference of two years between them, was Prime Minister and treated with such great respect and honour. He makes wonderful observations like the one about how a Hindu politician visiting Jinnah’s grave would have generated great fuss and attention but when a Muslim politician (himself) visited then people just showed him the path to the grave and let him walk down to there! He confesses to having made the biggest and most regrettable blunder of having chosen Nehru as his successor (something he says that he regrets more than his wife’s death) but quickly adds that Nehru would also agree to that. He expresses his disappointment at Gandhi’s stance over the partition and how he let Vallabhai Patel and Nehru and the Mountbatten couple to influence him. The lines vary between being sharp, witty, touching but always honest. I enjoyed the sher attempted by some Jose or someone like that who came to visit Maulana once. Maulana finds it amusing that his name should ever form the kaafiya of a sher and that too with as poor a word as khaulana!

In short the play weaved the entire persona of Maulana very beautifully taking us through anecdotes of his winning a poetry competition when he was about thirteen, to tales about Cheetah Khan, to tales about how he and the Maulvi would debate with Hindu priests about the Koran and the Hindu scriptures and then rush to the taverns to get themselves drunk, about his learning the sitar and a lot more. Mr. Alter’s Urdu was impeccable and his accents and intonations were remarkably well done.

If this play is performed in your city, please do join the audience. It is worth the two hours that one spends in such company.