I was just wondering what our Indian directors would do now that SM has won it. Apart from the “I knew ARR too” quips, I was wondering what would happen if they decided to shoot something similar.

Karan Johar: Kabhi Slumdog Kabhi Millionaire. Without question SRK would star in it with a really young actress (at his age, that is the only category left). There will, of course, be another heroine whom SRK would marry though still pine for the aforementioned one. K-Jo will build all his fantasies for SRK into the movie! SRK juniorest will fall in the shit (w)hole to get an autograph from SRK (real). In the end the winning question will decide whether he will go with little girl A or B (spoiler: he goes with A!) Of course, SRK will break his shoulder blade while reaching for the cheque that Anil Kapoor gives him and will be in Lilavati for a couple of weeks.

Anurag Kashyap: Slum D. Some totally unknown actor will be Slum D (which is basically the cooler version of Salim Dawood). Slum D is raised in a street full of brothels and in the midst of drug addicts. His little love (which becomes his big love before finding another I-got-better-things-to-do love) is the daughter of a prostitute. Everyone swears at the camera while it zooms in and out and Anurag Kashyap captures the angst of the common man in a scene when Slum D refuses to sing a bhajan because everyone on the road only likes hip-hop albeit in Marathi. He will use the story of the German teenager murdered in Goa as part of the story and probably fall in love with the actress who played that role. To make it more realistic, he will have the slum in Goa (booze, babes, pointless events and much more).

Sanjay Leela Bansali: Hum Slum De Chuke Sanam. The slum would no longer be corrugated roofs and narrow alleys. The entire area would have an eight lane road and everything will be bathed in orange and red (because black, blue and green have already been exhausted and yellow and purple are reserved for his next movie). There will be a dozen or so songs and even Anil Kapoor would dance to one in his designer sherwani. The train on which the kids (dressed in cute knickers and hooded sweatshirts) escape would be the Palace on Wheels.

Karnataka directors (all are alike): Slumey Dogey Millionairey. Every woman in the movie would be busty (so the reason behind why the hero’s mother floats is understood) and the entire movie will have someone (everyone?) from the Rajkumar family in some role or the other. It will win all awards though it will make no sense nor have anything to do with the original. Thousands of locals in Bangalore will burn autorikshaws because millionaire is not a Kannada word and it should be because it ends in “e”. They will stop providing Cauvery water to Tamil Nadu because of that.

Tamil Nadu directors (all are so different that I’d rather spare this post): Silumbu Dogu. Simbhu will demand rights for the movie because his name (rather condensed name) rhymes with Silumbu. The kids cannot sing bhajans because that is too Brahmanical and the Chief Minister doesn’t like it. So Maman digs out their eyes to sing and dance dapankuttu. They get on a boat to Sri Lanka and take the visiting Indian ministers on a tour around LTTE strongholds. That is where the hero learns that Ashoka had a wheel and that Benjamin Franklin was actualy Sri Lankan and his first name derived from the cure for baldness (Pane Chemmeen: To cure lice apply a mixture of prawns soaked in coffee and coconut oil). Apparently, the concoction didn’t work and he left for America to seek revenge. This movie gets tax deduction because it is about the difficulties of Tamils in Sri Lanka and how quality idlis are not available there (something to do with the lack of coconuts for chutney). The Chief Minister of TN is troubled with the lack of Tamil specific questions and decides to fast himself to death by eating only idlis.

This movie was attempted in Bengal but it failed because millionaires are not allowed in Bengal. Mamta Banerjee felt uncomfortable with the idea of someone becoming so rich that he can buy back his girlfriend and she began chanting “Nano go back”. Nobody understood a word of what she was saying or complaining about but joined in and burned a few tea stalls before they realised that several Bengalis had actually made them their homes or adda. Government offered sops for these shops and Rabindranath Tagore was remembered in various schools. 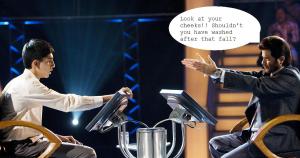 Yes, I watched Slumdog Mill and I am still not sure why it even deserved a mention let alone all those awards. If Slumdog Mill should be the measure then every Ocean’s 11,12,13 should have one something or … well, you get the picture. The movie had nothing spectacular about it and to have won the awards makes me wonder. A.R.Rehman is definitely talented and deserved a tonne of awards but to have been recognised for SM is sad. I could pick nearly any of his earlier movies and the composition was several orders better. Gulzar saab for Jai Ho? Both a Californian and my grandmother pronounce that as Aiyyo, and rightly so. But there are somethings that logic cannot explain (most of what my grandmom says falls in that category) and hence we accept SM to be in the league of great movies (really? I can never put it on par with, say, the Godfather or even The Dark Knight). Frankly, I am yet to see a convincing argument or stance as to why that movie deserves anything. But India will be happy because Amayrika gave us an award. Whatever!