“The skill is in highlighting each minute details and hence it is called miniature art”, explained the tobacco chewing Madan Lal. He confessed to eating a heavy breakfast followed by nothing till late in the evening so that he could spend a lion’s share of the waking day dedicated to his art. Learning Rajasthani miniature art from him was a pleasure. The weekend was spent in anecdotes about how he would create various details and how his ancestors have been involved in this art for centuries together. He told us of an elaborate painting that he sold in Delhi for over a lakh (but by then we were so much in awe of him that a lakh sounded like pocket change).

He was glad to have me in his class because I was the only guy! The coordinator of this workshop expressed her surprise about finding a guy sign up for a painting workshop (“only girls have signed up till today”). With great pride I cherish that moment when Madan Lal-ji thought that a particular piece of painting in a picture was done by him when actually I had done it. He kept insisting it was his work till the fine ladies in my group had to show him the canvas on which he had actually done it. That, was accolade enough for me! Pretty Bina, from Nagaland, added to my joys (in more ways than one) by proclaiming that my first piece was better than the sample artwork (which was up on sale in Madan Lal-ji’s shop). I could have hugged her just for that but I had to keep telling myself that this is Madras! Having gone for this workshop without any expectation it was easier for the Master to mould me in the way he wanted and for me to emerge with great satisfaction and a sense of joy.

Rajasthani miniature is not something to be learnt in two days. Any claim to having mastered the technique in such a short duration is ridiculously stupid. Two days into this art form and I realise the great amount there is to still learn and master. I have become comfortable with only two techniques: flattened brush shading, jaali-work. We worked with delicate squirrel-hair brushes and my wrist and every tendon in my opisthenar cries in pain! Madan Lal-ji is available in Dakshina Chitra till 4th of Aug 2009. It would be worth your while to stop by and learn from him.

If I may bring to your notice, note the jaali (something like a mesh but supposedly made of fine silver threads or similar precious metal) bordering the elephant’s howdah (blanket). One can actually see through it what lies beneath. The background colour is textured to give it a feel of mural (with chipping plaster, etc.). Rajasthani art (the way they draw their figures and objects) is not meant to be realistic (would an elephant really have such a bump on the forehead? Would its nails be collected in the front? etc.) but artistic-fantastic-realism. The human figures have elaborate eyes and lips but the women are mostly flat chested though the roundedness of the breasts is depicted. Clothing is transparent and that is a technique. I would share the other work in my possession which provides a sample of the detail work that can go into landscape, but it is incomplete and would add it to this blog once complete. 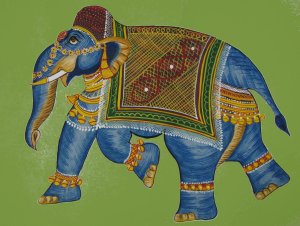