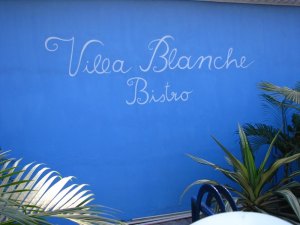 Villa Blanche. I thought it was to be pronounced as Villa Blanc till the sweet voice over the phone told me it was Villa Blanche. That is what you get for trying to be French when the only thing closest to being French about your birthplace (Madras) is Pondicherry. Well, zat vaas ye pun.

Villa Blanche is one of the few places in Goa you go to (and hence, the Tamilian name to that place – go-aa?) for a fine experience. Food, per se, is fantastic nearly throughout Goa. You get wonderful food even at shacks and roadside hole-in-the-wall type places. In a completely rundown place where perhaps very few people would come, there was (and still is) a place called Tilve Bhojanalay. You would think that such a place would serve below-average food since the clientele was rare and the locals. Correction, monsieur! That is one helluva place to eat food and, if you are vegetarian, a place where you have no choice but to eat their thali which is good nevertheless. In short, Goa is fantastic for good food.

Back to Villa Blanche (I so wish). This is a quaint blue and white house in Assagao. I could give you the route to this place, but it wouldn’t make sense. Call me when you are on the junction from where you can go to Vagator and Anjuna and Assagao. Yes, it is to the north of Panji (or Panaji or Panjim). There when you take a right and go to this place called Tamarind house (or House of Tamarind or something to do with Tamarinds) you need to give me a call. If you don’t, then you need to keep going straight and turn left and go to a bunch of rumblers and turn right. Or call Yogini for directions. Yogini is the charming hostess of Villa Blanche who was suspicious of me and my camera. She thought I was a journalist. Her dog, Mufti, thought I was sweet. Sweet journalists don’t exist and hence, I am only going to choose “Sweet”.

When we reached Villa Blanche, I was delighted to find it nearly match the picture I had in mind. Warm sunlit roads led up to this blue-and-white house. The house opposite it is also nice though (as I recall) it was in red. It wasn’t noisy. There were a few bikes parked outside and I heard a tingling laughter come from behind the leafy barricade of the bistro. There is a quality of laughter that not everyone possesses – the ability to infect another with a smile. The mere sound of it, a distant view of it, and the observer helplessly smiles. Not all laughter is of the soul. We walked in, bowing through the arches of wild plants, and landed right in the midst of the cheerful Villa Blanche with Yogini smiling looking pretty in her spaghetti blouse and short skirt. She clearly carried the cheer of the place. She asked us where we were from and when we told her how we had heard about her place she was proudly disappointed to know that people all over India were familiar with her place. She gave me the picture that she would have preferred to be less popular but also acknowledged the renown her place was earning. I had come to taste the creation at this place to figure out whether it was just tall talk or the place really had something to offer. I must say it was well worth all the praise it had received.

I found the place like a hidden oasis. Bright colours without being gaudy marked the place and its decor. The canopy above looked like some torn parachute and made me wonder whether Villa Blanche really fell out of the sky. There were chairs and tables (topped with tastefully done mosaics) and there were also ground level seating options. We picked the latter since the tables were all occupied. I suppose we were the only Indians there (discounting the cooks and helps in the kitchen). Yogini continued to eye me suspiciously as I walked around shooting tables and hanging trinkets.

J was busy arranging cookies into small polythene bags and tieing them cutely with red and green ribbons. She was one of the most lovely-skinned ladies I had met in Goa. The attention she gave to her work impressed me even more and her sweet smile and lovely chin made me sigh. Yes, J was quite a beautiful lady without trying to be so. She was wearing the plainest frock and had tied her hair in a simplest crochet/woven net. She didn’t wear any jewelery around her neck and the necessary pen clung to the cloth of her dress. She was from Germany (which perhaps explained her efficiency and accent). She will be J for this post as her name is not announced or associated with Villa Blanche and I don’t know whether she would like her name spelled out here.

“Not all cafes and bistros are about the food” which isn’t what I am using to say anything about the food at Villa Blanche. If the food is bad no matter what the ambience is, I will never go there again. Hence, I have to tell you that I often go to a place more for the ambience and the warmth than for the food. Hence, you find me describing the place more than the food itself.

Nevertheless, Villa Blanche offers good food but the ambience and the warmth of the place supersedes the quality of food. The food is lovely and fresh. Indians who do not like European, esp. Mediterranean, food should not even consider Villa Blanche (though there was tofu and peanut satay on the menu too). The food is for a mild palette and that is what I loved about the food. The salads were

fresh and the feta soft and salty. The dressing was deliciously light though the addition of sprouts seemed like a local adaptation (though I might be wrong there). I am told that the non-veg was good too. My main course was plain rice with fried tofu and peanut satay. Mild and nice though I had cool it down before Mufti darling could bite into them (before his master, Marco, ordered him to go “unter” a table). For dessert I had a cheesecake which was made according to a “grandmother’s recipe”. It was delicious. My friend simply kept emitting sounds of pleasure with each dish he had.

The crowd that came there was a mix of all sorts though most would be classified as a group to which Yogini belongs – Hippies in Goa. I was introduced to an Italian designer and her friend who looked like a tempered Johnny Depp out of the Pirates of the Caribbean. The people there brought more life to Villa Blanche than any other single element. The decor was great, food was good, location was nice, colours were tasteful but it is the people that made it a place one would like to re-visit and I think that is the magic that Yogini and her partner have managed to create at Villa Blanche.