Let’s call her S or P. She was called both, but loving conversations found me massaging the word P between my wet lips. She was (if I recall correctly) a year younger than I was but the urge to ensure that a girl is younger than I am was missing in those days. I was all of 7-8 years and enjoyed her company as much as I enjoyed cricket (and at times French-cricket).
We lived on the 2nd floor while she lived with her younger sis D or N and a beautiful black puppy called T, on the ground floor. That was my reason for stopping by her place every time I had to step out of the building. D or N and I were good friends, but she was a little baby and loved to hear all kinds of stories from me (yes, I was a storyteller since the day I managed to say “Who?” through the letter dropper on our door, whenever the doorbell rang). I used to cook up stories about “Machchar” (mosquito) and how they were dragon-like and would swoop down and eat her. She would cling to me, and I felt like every knight in a tin can does. D or N was (and I hope still is) a darling.
But her much older sister had all my attention. We would meet whenever school and homework allowed us. We would meet in the clubhouse (a small enclosure where people played bridge, TT and badminton. I recall a swimming pool in there, but I am not sure), near the bushes that lined the enormous boundary walls, in the stairs… just about anywhere. She was very dear to me, and I enjoyed the mere pleasure of seeing her at close proximity, as one enjoys the warm caressing of an early Winter morn’s sun.
We would go to hunt oyster shells. Actually, these were shells of something (I liked to believe they were oysters, as I had just recently learnt that word) that were thrown out of the kitchens of non-vegetarian homes. They smelt bad but the team activity compensated for that. We would wash them and store them in a plastic bag (which was also thrown out of some kitchen) and feel happy about what we had built together. 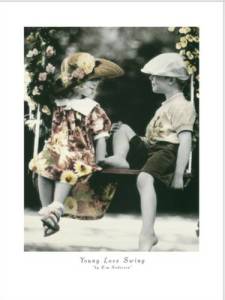 She had once bought a new swimsuit. It was dark blue with little white spots on it all over. It was a single piece (and the girl was about 5-6 years old, so rein in your imagination). If I remember right, it had white lace frills around her neck. She wanted to show it to me. She had worn a skirt over it and hence, it looked like a normal dress in which she could be seen. She held my hand and took me into a room to get my opinion of it. Well, I shall summarise by saying that she showed it to me, and I had no taste to influence my comments on fashion then. I must have said, “It’s ok. Come on, let’s go play by the slide.” Well, what did you expect from an 7+/- year old?
I think the finest time I had with her was watching “The Sound of Music”. Those were days of video cassette players. We watched “The Sound of Music” at her place and all of us (there were at least 6-9 of us) enjoyed it. Then she gathered a few of her girl friends and decided to enact the famous song “So long, farewell”. I got to sit through all the rehearsals and offered my comments on the near sameness with the original. D or N enacted the little girl in that song. This was to be presented during some function that was held throughout the apartment complex (what we called quarters. It housed about 700 apartments or more). The stage was set on one side of the garden, while the clubhouse was to the rear. We met once before the item was to be performed. I wished her the best and thought she looked like a wonderful woman with the lipstick and shoes. We held hands, before she surprised me with a quick peck. That was the first… ever.
I have always said that I love her. For many years, I called her my first love. I remember telling my sis once (and I was wearing an orange and white shirt while lying sprawled on the floor and watching my reflection tremble in the cup of the revolving fan above) that I loved S or P. My sis was shocked (probably because I had someone to love before she could pick her guy) and asked me ten times whether I was sure, in the hope that I might get bored and change my answer the tenth time. I left S or P when I was 10 years old (because dad got transferred to another city). I think we promised to keep in touch. I have always thought of her since then. So many things have changed. We were kids. Not sure whether I ever grew up.
I remember visiting the quarters, once, when I was 17. She was not at home. I met her mom and dad and they told me that she would be returning later in the evening. I was planning to visit her then, but I ended up having a miserable stomach ache (I had really turned ashen) and had to rush home after dinner. My sis, I think, met her. I never did.
Its been years since that happened (my leaving her as well as my unable to meet her) and my conception of love has changed (to become nothing more than a hungry stomach’s grumbling often mistaken for that “Kuch kuch hota hai” phenomenon). Last summer I sorta realised that what I thought was love is nothing more than deep caring (which I seem to have for a good number of wonderful people in my life) and hence, shouldn’t be used ever in conversation or in describing a relationship as it leads to untold confusion. Which makes me go over the ghazal I wrote a few days ago and think:

Every evening has haunted me with the void of (her) absence
Had I not separated from that innocence (of the relationship) what would have happened?

But today, I was reading some cookbook’s release announcement (yeah, I read that too) and someone called S had commented and congratulated the author on the release. I couldn’t help smiling and doing a quick search online. I think I spotted her. I don’t know. She is grown up and I am unable to recognise her, but I think it is her. The smile is the same… 🙂

It is sweet and tender when the the memories of young days hold stronger than the firmest convictions we create under the aegis of surety in ourselves. I hold them close to my heart and watch them shiver, not from the frailty of what was, but from the fear that unsettles my grip around things long past and beliefs long dead.