She wouldn’t allow him to be tired tonight. She lay in the midst of all the old cassettes that they had collected over the past seven years. Small palm sized rectangles with actors and actresses of yesteryears frozen in scenes from the movie, some with more than one movie tracks captured in them. She had them spread out around her. If you sat back, somewhere above the door leading into the dining room and watched her, you might find her to be the culmination of all the 3D cards of tunes that lay all around her. The strongest bond that held them together was that of music. She was an artist and he, an aficionado.
Suraj walked in and tossed his bag on the sofa and crashed into his favourite recliner.
“Tired?”
“Pooped.”
She had worn his favourite red chiffon saree. She slowly got up facing him and turned oh-so-slightly in the most seductive manner before she tilted the remote towards their music system.
“Suraj hua maddham, chand jalne laga…“
He smiled and threw his hands up in mock surrender.
“Aasmaan yeh hai, kyoon pigalne laga. Main teh… Tta se gao.”
“Mad or what? You can’t stop at the start of the word!”
“Everything is fair in”, she kissed him on his lips, “and antakshari.”
“Hmmm. Madam is in full throttle today! Ok… let me think.”
He ran his hand through his hair and then smiled. He twisted an imaginary guitar into place and started.
“Tu hi meri shabb hai, subah hai…“
“Hello! Tta and not tha.”
“I thought someone said everything is fair…” and he winked.
“But it’s a new song.”
“And Suraj hua maddham is old!?”
She walked up to him and flicked his chin with her finger.
“But it had context, tired hubby!”
He snorted a laugh and tried recollecting a song starting with Tta and something she would like. She had gone back to her scattered array of magnetic tape memories.
“Tum..mmm..mmm pukaar lo, tumhara intezaar hai…”
“Sing it in that Hemant Kumar voice, please.”
He lowered his chin to his sternum and rounded his lips into a stiff “O”.
“Khwaab chunn rahi hai raat, bekarar hai. Tumhara intezaar hai.“
She laughed at his mimicry.
“So many songs have been the hours of our life together.” 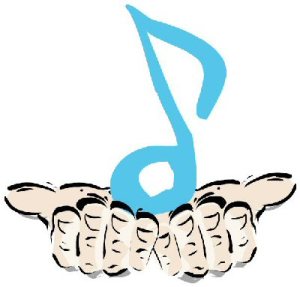 He smiled at her and beckoned her. She slowly walked up to him and sat on his lap.
“Remember the first song I sang to you?”
“Ha ha ha. The one you murdered or the one that you managed to sing well?”
“Come on, you are the only one who says that I do not sing Mere Mehboob well.”
“You were so off-key and all of us kept laughing about it for so many days.”
“Not fair”, he pushed her off his lap, “What was wrong in what I sang?”
“Ok. Sing that high pitched verse again.”
He cleared his voice and Trisha burst out laughing.
“Get lost. I am not singing.”
“Ok ok ok. Sorry. Sorryyyyy. Please? Please? I promise. No laughing or even smiling!”
He cleared his voice again and started:
“Yaad hai mujhko meri”, his voice broke but he continued, “umr ki pehli woh gadhi…”
“See? See? Totally off-key. Come on Suraj.”
“Please. After a day at work, it is not the easiest piece to get without some warming up. As if you could get sing O Duniya Ke Rakhwale as soon as you wake up!”
He started taking off his shoes and tossing them loudly. She was disappointed that this wasn’t going as expected. She slowly started humming before she sang:
“Chahe tum kuch na kaho
Maine sunn liya.
Ke saathi pyaar ka
Mujhe chunn liya…“
“So this was off key too?”
“Come on Suraj. This was the sweetest song you ever sung to me. And you sang it so well. But how did you know that it was my favourite then?”
“Not anymore?”
“It still is, just that it is my favourite for a different reason now.”
“Your friend Saroj told me that you were going to marry Aamir Khan for singing that song. So I thought, if not his good looks, at least I could…”
“Cho Chweet! I love you.”
“I love you too, but I am not off-key.”
“Get lost!” she said and burst out laughing.
“What was that song you used to like?”
“Which one?”
“That Jagjit Singh number.”
“Arth?”
“Yes!”
They started humming the tune and singing spurts of lines from the song.
“Tere kushboo mein“
“No, not that version. The movie version.”
“Starts with some “Ek”, right?”
“No… forget it, we’ll remember it later.”
“I still remember how you and Divya danced to that song from Teesri Manzil”, she said and waved the cassette at him.
“Ha ha ha. That was wild.”
“Do it!”
“Mad or what!?”
“Come on! Dance your piece.”
He got up and rolled his head before he started singing and dancing a Pulp-Fiction-fingers-over-eyes step.
“Dekhiye sahebon woh koi aur thi, aur ye naazneen hai meri.“
They laughed together and recounted stories of how Divya fell hard on the stage and how that got the dance the prize out of pity! They started pouring over their collection and sorted them out, first chronologically then according to the ones they would listen to more often than others.
“Hari died, you know.”
“What? How? When?”
“Last week. I got a message on my mobile while I was in office today.”
“Oh! My god. How?”
“He committed suicide. This”, he said, holding the cassette of Pyaasa, “was his favourite and a gift to me.”
Trisha leaned on his shoulder and cried in mild shudders.
“How he used to sing Jaaney woh kaise log the!”
“Beautiful. He had it all but no one to share all of himself with. Sad.”
“He needn’t have rushed into the smoking and drinking circuits. Silly fellow.”
“Suraj, please. Let’s not.”
After a while, they continued ruffling through the collections and assorted recordings too. She picked up one and waved it at him.
“Sagar?”
“Hmmm.”
“Kitu’s party, right?”
“Hmmm.”
“Dil kehta hai, tu hai yahaan to, jaata lamha thamm jaaye.”
She closed her eyes and smiled at the scene that ran behind shut eyes.
“And of course, can we forget Abhishek’s song that made you stay?”
“Suraj, come on, it would have been rude had I left the party after he started singing that.”
“But when I asked you to stay too, you still left.”
“Suraj, everyone started pulling me back, and…”
“He still quotes it as his favourite song in all his interviews and even sang it on that music talent show which he judged, which one was that?”
“I don’t know.”
“Of course you do. “Mere saath gao”… no… what was it?”
“Suraj please drop it.”
“Abhi na jao chodd kar, ke dil abhi bhara nahin. You knew that he loved you. Everyone called you guys the best duet in college.”
“I didn’t love him, Suraj.”
“Yeah yeah yeah, that is why you sang Teri Bindiya Re with him on the farewell day?”
“Excuse me, that was the song picked up by Lata Ma’am. Not my choice, nor his. Forget it Suraj. Its been 8 years since that and you still…”
She got up and left for the room to change into her pyjamas. He roughly swept all the cassettes to one side and stared in her direction. Who was she kidding? I still remember how she stood speechless while he sang the song on the stage and melodramatically kept pointing at her. He loved her, yes. She too loved him and would have gone with him had it not been for his greater love for music. I was more reliable with my top scores and sure shot posh lifestyle. Damn!
Dinner was skipped that night and they lay on the bed staring at different pieces of furniture in the room. He went over the past 8 years. Was she still in love with him? She never mentioned him, but still… He had kept track of Abhishek all these years. Whenever he was in Bombay, he had canceled all his trips and stayed with Trisha. He couldn’t imagine losing her. Suddenly he remembered. He rolled over slightly and whispered, “Trisha?”
She didn’t respond.
“It was Koi ye kaise batayein. Starts with Ka and not Ek.”