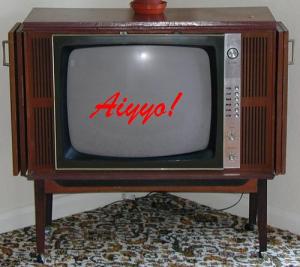 “She is her father’s daughter only. She will of course cry, no?”

This was the most touching dialogue in the serial before some guy started screaming “Ravana, return Sita”, clutching a dangerously eye blinding orange coloured drink. This gent (the one who spoke the dialogue about fathers and daughters) dressed in all white with atrociously large square specs (you could see the magnified horendously pink upper lip) is supposed to be a great scholar who insists on speaking in hilarious Tamil (he calls an autorickshaw a “moon-chakra-vaaghanam” because vaahana is too Sanskrit and autorickshaw is plain unpatriotic). This was his response to a young girl’s desperate attempt to have a seizure long enough to produce water from her eyes upon hearing the tragic news of her father’s illness(I still remember when everyone in my house would start mumbling “glycerine” as soon as someone on screen would cry. I grew up thinking glycerine was the root cause of all sorrow!). I think she simply ended up shaking the hospital table too much (this moving scene was shot in a hospital or so we were made to believe with a nurse or two periodically pushed into the scene).

I could never understand the need for that dialogue, because I didn’t get enough time to ponder over its valuable import. My mother was quick to shake her head and confess chokingly, “This is surely based on a true story?” What? There really are such men with gaudy pink upper lips!!?
“You know E, these are true stories.”
“Mom, please. Not every one of your serials can be based on real stories!”
“No, no, something like this must surely have happened, else why would they show it on TV!”

She continued seriously to draw links between the Nathari killings, adultery in mango pickles (she still pronounces ingredients as inheridients so please realise that she was not talking about an extra-marital affair of a raw mango slice), bungee jumping, petrol price hike and eventually wraps it in a dollop of wisdom gained from the latest show of her favourite Iyengar scholar (the gent who comes on Podhigai) to help me understand how everything is actually an instantiation (that’s OOP for you) of what happens in real life!

I simply nod my head for fear that she might involve me in her next club’s meeting. She is a devout member of the See?-Real! club. The other members are my sister (shame shame), my grandmother and my uncle. Their meetings are conducted with least respect to boundaries. My mother could be on the moon making idli for Neil (did they bring him back?), but she will still call her mom to check on what happened in Kolangal, Anandham, Lakshmi and Arasi/Selvi (that heroine freaks me out! Initially she was just one woman in the size of two. Now she is actually two women!!!).
“Houston! Can you hear me?”
“Yes, ma’am loud and clear!”
“Loud? Should I speak softly? Since there aren’t people on the Moon it’s a while since I spoke and hence …”
“Ma’am, its ok. Do you have a message for the people on Earth?”
“Message? ummmm Lakshmi should realise that Nethra won’t change! She is only trying to cheat her and her husband. Please ask my brother to let me know what happened to Arasi? Is she in jail? She should go looking for evidence in…”
“Ma’am, ma’am we are losing contact. We are…” Beeeeeeep Beeeeeep Beeeeeep.
“Are we sure we did the right thing by sending E’s mom to the Moon?”
My TV would sure feel happy!!
The most annoying and simultaneously funny thing is watching all the club members gather around the tube and pass comments about the characters. Weird part is when my mother would turn around and call out to me and ask me for my opinion (actually they are just cursory request for comments. If I keep my retarded look long enough, they just ignore me). Suddenly people think I am that secret member of the club!! Here is how a typical conversation between the club members and the idiot box would be. Does it matter who are the speakers?
“How dare she?”
“But then he did that to her in the Tuesday episode”
“I tell you, all these this time (indha-kaalam) people are like this only” (that’s grandmom for you)
“But her sarees are always so good.”
“Hey! E, he is wearing the same shirt that you had in the summer of 1995” (Not the same one, you dork. She meant the same pattern. Yes, that was my mom speaking)
“Hit sinner!!” (Adi paavi)
“I knew she would do that. Didn’t I tell you, she would?”
“Now I am sure she will ditch him and marry him” (both hims are different. Don’t make matters worse for me by sharing your confusion!!)
“What happened to that lady who adopted her own daughter as her daughter-in-law” (that was my sister who gets quarterly updates about the serials whenever she visits home. Trust me, she is the queen of remix! She can take 10 serials from 14 languages and create a mess that probably only Ekta Kapoor can relish)
“Hmmmm” (that is my uncle. Very serious See?-Real! member)
If Harsha Bhogle thought he invented the post trauma analysis, then he better not meet my mother. My mother would pause before serving me rice and look squint-eyed at the distant table. Damn! I should have had that cleaned before she arrived!

“You know what!? How come he never saw through her all this while? She has been cheating him for so many years (God! Mom! this serial is only 5 months old!) and still he trusts her. All these men fall for a woman and ruin their lives!” then she would look at me with reprimand glowing in her eyes “Don’t you ever let that happen to you!”

Why do the Westerners call it a soap? Or rather a soap-opera? I see nothing cleansing or operatic about the serials with loud song-and-dance sequences at the start and end. Oh that’s the opera part! Got it!

One thing I find astronomically amazing is how easily these people accept a new character as an old one. What I mean is the serial producer’s choice to bring in some new actor to replace another for a character in the serial. As in, next day we suddenly see this sane man calling a totally different woman his mother!! My mother would consume that easily with a “Aah! They have changed the actress!” and then continue to convince me that this is based on real life! Really!? 😮 I could understand that for the husband (well, look at the Sheiks in the Gulf. People must be making such remarks about them every other day!) but for that man who just uttered “Amma” with all sincerity!? Gosh!

Watching the club members is sheer fun at times. You should see how they gleefully exchange the demarche of the leading characters and how and what will happen in the days to come. Hindi serials are equally crazy what with their ladies having 25 year old boys but look like they are their son’s younger sister! Actually, that could be the twist in the tale!! Every bahu looks absolutely freshly plucked from a nearby Lakme salon (though they will all confess on screen to using nothing more than turmeric, henna and clarified butter for their eyes! That they had an affair with their husband’s friend’s father’s two-timing brother makes up for the sauce. Hence, Sauce bhi kabhi bahu thi or, in English, There’s a saucy daughter-in-law for you!) and make me doubt the innocence with which her “son” hugs her and takes her blessing!! Yeah right!

Mom would have comments about everything that happens everywhere. Every character is addressed on first name basis and scolded like how I was for not having washed my clothes for over a month. She is surprised why some character won’t listen to her (which is not just her view but the most commonly held view and hence, something that was available to the character but was disregarded making the character less liked by her!) or how someone could speak like that (not what I explained to you, but what the character just said). Her personal favourites are the ladies who suffer due to callous children!! She is quick to fling them around the house in the hope of making us feel more watchful of our ways or just plain guilty for something we never did!! But I never attended the class where they taught us about guilt!! 😀

Never confront such worldwide See?-Real! members. They will quickly point to you that they know that this is not real (woah! I thought they were, no?) and they just view it as “timepass”. Some will twist the sword around to remind you that you hadn’t spent time with them else why would they have to spend time with an idiot box! No amount of “But you have always been watching…” will help unless you are damn good with dates (and that doesn’t help much when you are up against the members) or crazy enough to get into a chicken-and-egg discussion. They are quick to let you know that they never bothered when the serials got over (but of course! Thanks to the channel enticing you for months into another one which would start on 4th April in the same time slot). Any such announcement and the members’ discussions about the fate of the characters in the doomed serial reaches frenzied heights. Someone has to die and hence someone has to be the killer, but he is too sweet and she is too traumatised to be the killer (so let’s make them a cook and a bus driver respectively) and then what about him who vanished in that bomb blast (but actually had to be removed as he was getting more money in another serial)? Will he return to supply the missing clue and will they all live happily ever after? Several mini-serials are run before the serial actually ends with each member claiming that s/he had thought about it already! After all it was just a slight modification (that A died instead of B is slight enough in this world) of their mini-serial number 56K8T4.

With every serial being the last one my mother will ever watch (how can they produce such tripe, E? Honestly, who watches these things, son!?), I wonder when I will have the TV all to myself so that I can watch Nigella Feasts without disturbance! Now that is fun and real (I am told they are both real! Come on, they look real! Don’t you talk about Nigella like that!).