Mitsuo-san was very troubled that particular September morning. He didn’t know it was September (though he did notice the trees wear a different colour) but he knew it was morning because he set out for a walk wearing a warm tunic. His favourite nephew had returned from the war and he was rather disturbed. Mitsuo-san went to meet him two mornings ago and saw his nephew slouched in a corner playing with a reed. He tried to cheer him up and took him to the market to eat something spicy and fried. The prawns were fresh and in special chili sauce they tasted juicy and crunchy. He knew how much Hachiro loved prawns and he had paid an extra amount to the fat lady behind the stall to add some extra ginger flakes to the plate. Hachiro ate one of them and smiled. He returned the plate to the lady and thanked her for a wonderful dish. He sat down beside Mitsuo-san waited till he finished. Then they went to the gambler’s square but even that didn’t stoke an interest in Hachiro. They went to the lady’s den and Hachiro walked through it all and returned to where Mitsuo-san was waiting (the teacher would not enter the streets of vice). Nothing had cheered Hachiro-san. Finally they stopped by a farm fresh with an eager crop.
“Son, what is it that bothers you? Was it something about the war? All your friends have returned to a normal life with gusto save you. What is it that ails you?”
Hachiro-san was quiet and he listened to the music of green waves. He continued to play with the reed, occasionally looking into the distance as if expecting something to run out of the woods. Mitsuo-san waited patiently because a question pressed often doesn’t provide the right answer. Hachiro eventually respected that patience and spoke out.
“Dear uncle, it is perhaps the war and perhaps not. What happened, could have happened anywhere but it happened in the war, so it is not due to the war.”
He paused to check the skirts of the forests.
“A soldier was wounded in the fight. He belonged to the Tagasaki army, not ours. He asked me to give him some water and I did. He asked me to pull him to a spot away from the fight, and I did. I tended his wounds and took care of him because that is what one does when a man lies wounded in front of you, is it not?”
“A noble act, indeed.”
“When he felt better, he took his sword and attacked me. I defeated him and killed him.”
“A just act, indeed.”
“I was unable to fight the war anymore thereafter.”
“Why, Hachiro-san?”
“I don’t understand people, uncle.”
“Were that to be required to wage a war, the world would be the most peaceful place.”
“Why did he attack me?”
“Because you belonged to the opposing army.”
“But had I not taken care of him as his own?”
“That does not win the favour of his sword.”
“Not even of his conscience?”
“Apparently, no.”
“Then what is it that you wise men talk about love and that love conquers all? It is all a lie, isn’t it? It is just a convenient call to the hopeful and the believer, isn’t it? And those who benefit from it, will still continue to be their petty selves.”
Thus had ended that day with no discussion further extending it. Mitsuo-san was disturbed because he had no answer and he felt miserable being a teacher when he couldn’t instill in his own blood the strength of what he taught and preached. What use was it to talk of love and forgiveness when his own blood was left unconvinced. Other teachers would have taught to use love to their convenience or cut ties when no advantage was to be gained, but he didn’t believe in that. But he had no answers either. He knew that he had to consult Master Nobuyuki before his nephew be mis-guided.
He found Nobuyuki-san practicing Tai-Chi with his rake in the rock garden. 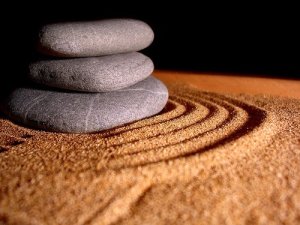