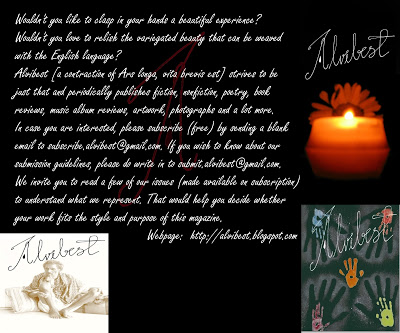 I think it is high time Alvibest came back. A few others agree. Most others go, “Alvibest? What’s that?”. I have none to blame other than myself. Its like having a child and keeping her away from her grandparents long enough to make them forget they had a grandchild. I know, I am blabbering, but it helps to blabber at times. Blabber, don’t blabber; noodles, don’t noodles… 🙂

So Alvibest will be back shortly. The periodicity might change. Or not. The content will be new (there’s no “Or not” to that statement). Anyone who reads this and feels that they should contribute, should refer to the flier above. If you know some friend of yours who might like to contribute, you still need to refer to the flier above. For those who weren’t part of the history of Alvibest, those little squares in the flier were the cover pages of some of the earlier issues of Alvibest. Sniff. I know, it is such an emotional moment! Sniff! 😀